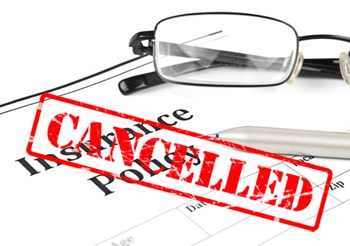 Under the law an insurer can cancel a policy of insurance even after a claim has been made. They can do this on the basis that at the time the policy was entered into there was non-disclosure by the insured person of information relevant to the insurer’s decision to accept the risk at the time. Not every non disclosure though will justify cancellation of the policy. Some information which would not have made a material difference to the insurer’s decision to accept the risk is not enough to justify cancelling a contract. Any decision to cancel a policy after a claim is made should be closely scrutinised to ensure the insurer is actually entitled to cancel.

These general comments apply mainly to retail policies where there is an individual contract between the insured person and the insurer. They will also apply to group insurance through superannuation where a personal health statement or similar declaration is provided at the time of applying for membership.

To cancel a policy an insurer must do that within 3 years of the commencement of the policy. If it is more than 3 years since the policy was entered into then the insurer can still cancel the policy but only if they prove that the non disclosure was fraudulent. Fraudulent is taken to mean not only intentional deception for personal gain but includes a reckless disregard for the truth.

Barry entered into a contract of insurance for Life, TPD and trauma cover in 2003. On the application form he was asked if he had ever taken illegal or non prescription drugs.  Barry answered no.  In 2013 Barry was diagnosed with a serious illness which meant he would not be able to work again in his usual job or any other job he was qualified to do. Barry made a TPD claim under his policy. As part of their assessment of his claim the insurer obtained medical records from Barry’s treating doctor. In an entry more than 15 years ago the records stated that Barry had been a one-time user of cannabis. When this information was received the insurer decided to cancel the policy on the basis that prior to applying for insurance Barry had used marijuana and failed to disclose it on his application. The insurer asserted that the non disclosure was fraudulent and had they known about it they would not have offered any insurance to Barry.

Barry’s lawyers requested a copy of the underwriting guidelines relevant to the question which it was alleged had not been answered truthfully. Those guidelines revealed that if the answer to the question was yes, then further questions would have been asked which would have revealed that Barry had only smoked marijuana once at University at the suggestion of a friend. In those circumstances the guidelines provided that the insurer had a discretion to still accept the policy and charge a slightly higher premium.

Barry’s explanation was that he had only smoked marijuana once with friends at University and after taking his first drag he did not like it and never used marijuana again. He answered no because he had forgotten about ever using it given it was such a brief encounter.

In those circumstances it is likely that an insurer would fail in any attempt to cancel the contract because firstly they would likely have offered the policy anyway and secondly Barry’s answer was not reckless or dishonest and probably the same as what any reasonable person would have done in Barry’s circumstances.

Lisa joined a superannuation fund in 2008. Two weeks after she joined the super fund wrote to her and made an offer of 2 extra units of TPD coverage at no extra cost if she completed a personal health statement. Lisa completed the statement and the super fund’s insurer agreed to provide the extra units of coverage.  One of the questions in the statement was whether Lisa had ever suffered any musculoskeletal disorder before. Lisa answered no.

In 2013 Lisa was seriously injured at work when she suffered a prolapsed disc and had to have surgery. As a consequence of her injury she became TPD. She made a claim through her super fund. The insurer requested an employer’s report from Lisa’s work which included a question as to whether Lisa had ever made any claims before for injury or illness. The employer answered yes and provided a copy of a workers’ compensation employer’s report signed by the employer in 2007 recording that Lisa had injured her back at work.

The insurer denied Lisa’s TPD claim completely and cancelled coverage for Lisa on the basis that Lisa had failed to disclose a prior back injury on her personal statement and had the insurer known about that they would have declined coverage for the extra units. The insurer asserted that the non disclosure was fraudulent as Lisa must have remembered such a fresh event at the time of completing her application.

Lisa’s lawyers contacted the employer to inquire about their answer on the employer’s report and discovered that the employer had put in an injury notification only to their workers compensation insurer after Lisa had mentioned to a supervisor that she had sore back muscles after lifting boxes for 2 hours at work. Lisa did not have any time off work and did not seek any medical treatment for the sore muscles. Her lawyers successfully argued that Lisa answered the question truthfully as short term muscle soreness was not the same as a musculoskeletal disorder which means an ongoing disorder or defect.

(These scenarios are fictitious and are provided as examples only)